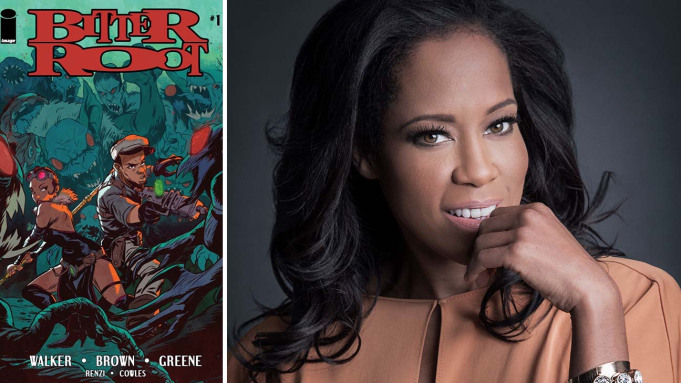 In her first move since winning acclaim for her Oscar-nominated directorial debut, One Night in Miami, Regina King has set her sights on a monster-filled, 1920s-set race-themed comic book adaptation.

Bitter Root is an adaptation of the Image Comics title created by David F. Walker, Sanford Greene and Chuck Brown for Legendary Entertainment, the company behind the recent box office hit Godzilla vs. Kong.

King will also produce the project along with Reina King via their Royal Ties banner. The two join a producing team that includes Black Panther filmmaker Ryan Coogler, Zinzi Coogler and Sev Ohanian, who are producing via their shingle, Proximity Media.

Described as a sort of Get Out meets Blade, the Vampire Hunter, Bitter Root is set in 1924 during the Harlem Renaissance and tells of the Sangeryes, a family of once-great monster hunters, who face an evil that descends upon New York.

Per Legendary’s announcement, “For generations, the Sangeryes have hunted and cured those infected by a supernatural force that feeds off of prejudice and transforms humans into monsters. But with most of the family gone, the remaining Sangeryes disagree over saving or killing the monsters.” The comic earned an Eisner nomination in 2019 for the best new series and a Ringo for best series.

After building a career as an acclaimed actor with an Oscar for 2018’s If Beale Street Could Talk and four Emmys to her name, King became an in-demand filmmaker with One Night in Miami, an adaptation of Kemp Powers’ 2013 stage play depicting a 1964 meeting of Cassius Clay, Malcolm X, Sam Cooke and Jim Brown. The film received three Oscar nominations.

King has delved into the comic book world before, delivering an Emmy-winning performance in HBO’s Watchmen.

She is repped by ICM Partners, John Carrabino and Gang, Tyre. Screenwriter Hill is repped by Verve, Heroes and Villains Entertainment, and Jackoway Austen.