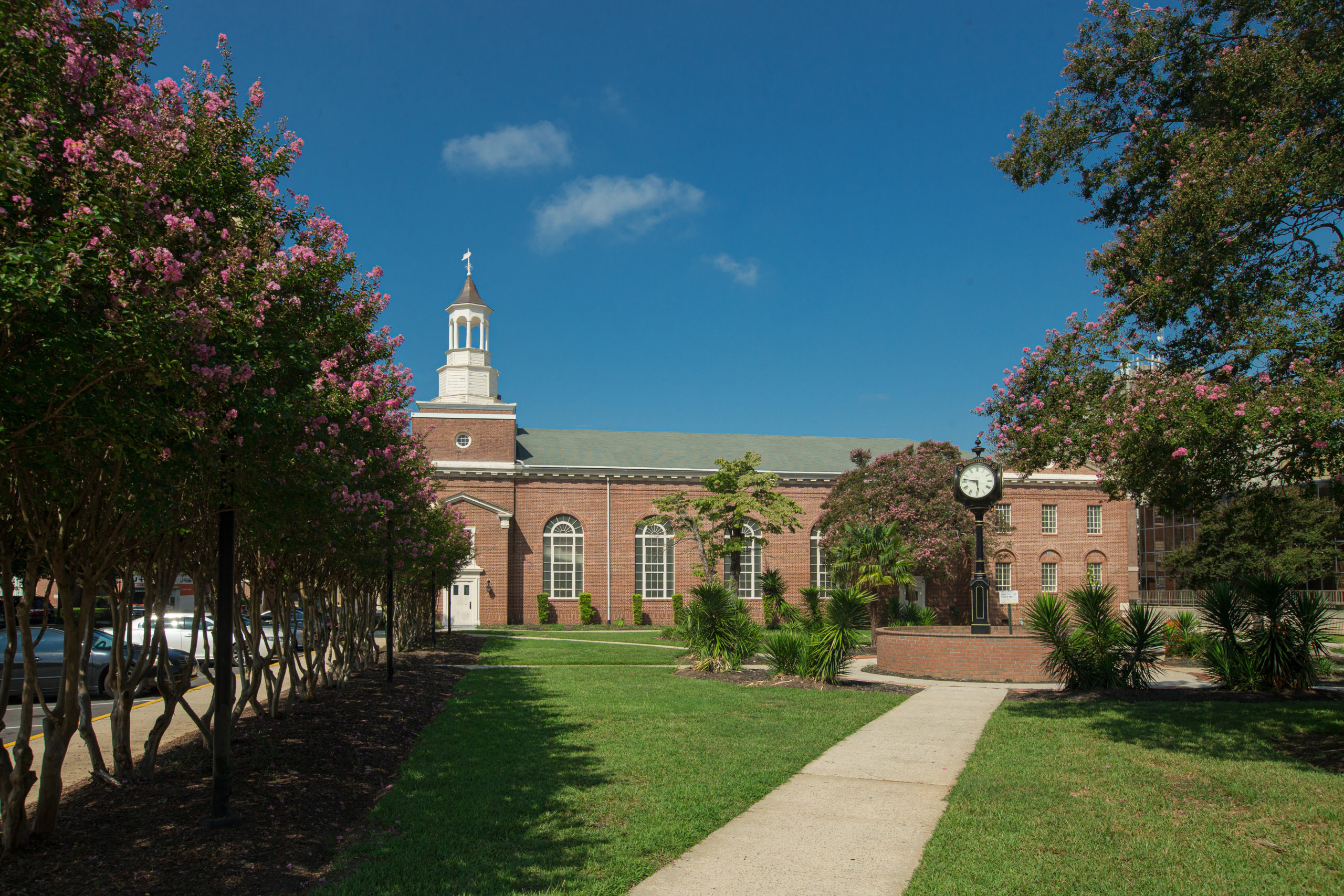 Race on Campus: How Historically Black Colleges Are Rising to Prominence in a Post-Trump Era

Welcome to Race on Campus, which is arriving on Tuesday after the observance of the Martin Luther King Jr. holiday.

When a violent pro-Trump mob stormed the U.S. Capitol this month, onlookers noticed that law-enforcement officers responded much differently than they did last summer to Black Lives Matter protesters. For some students and academics, it was a disheartening contrast.

In this week’s newsletter, Vimal Patel interviews the president of a historically Black college about the role she hopes it will play in preparing students for an evolving world and in guiding the nation’s healing process. And Katie Mangan speaks with the HBCU alum whose viral tweet underscored the value of such institutions in today’s political climate.

Healing a Crisis of Civility

To keep her students safe from the coronavirus, Roslyn Artis constructed a bubble around the Benedict College campus, in Columbia, S.C. But the president couldn’t create a barrier around her students to protect them from the horrors of society that came into full view as a mob, incited by President Trump, stormed the U.S. Capitol this month.

And she doesn’t want to. For Artis, the siege exposed America’s crisis of civility. It also made clear police officers’ different standards of response based on the race of demonstrators. And it clarified the role that historically Black colleges like hers can play in the healing process.

Artis spoke last week with The Chronicle about how she’s creating a space for her students to process tumultuous events like the Capitol riot and, more broadly, how she’s navigating a momentous year that brought the United States face to face with its original sin: racism.

The interview has been edited for length and clarity.

There are so many legitimate reasons for your students to be angry and upset at the system. How do you allow space for anger and also try to instill a sense of civility and civic duty?

Historically Black colleges, in particular, try to provide a safe space for their students. I tell my students all the time, No harm will come to you here, if I can prevent it. Intellectual safety is a very different thing. Many students have not had the ability to express themselves and freely debate and dialogue the issues of the day without fear of consequence. The goal is to be vulnerable, to be honest, without fear of judgment. I hesitate to characterize it as “safe,” because it can be painful, but it’s part of the growth process. We try to break down the tendency where we’re unwilling to listen to opinions that might be different than our own.

How do you try to foster such an environment?

On a very individual level, it’s through the practice of what we now commonly refer to on this campus as intentional empathy. We are intentional about listening, and we allow ourselves a little vulnerability. I’ll give you an example: One of my faculty was speaking with a student who was experiencing challenges because her parent is currently incarcerated. Covid-19 is ravaging our prison system, and she was fearful about her family member. So the faculty member told her that she, too, had a close family member who was currently incarcerated. Everyone doesn’t have that experience to share, but we invite our faculty and staff to be vulnerable if there’s an opportunity to do so. That creates trust and allows the student to open up and share more. We’re trying to be more intentional in listening for those opportunities.

Are you in the weeds of this work?

Yes. I have a book club. We’ve read a number of books on criminal-justice reform, like Just Mercy. We engage students in intimate conversation around criminal-justice reform and equity. We help students talk through their feelings in a very informal setting, with reading materials that are outside the traditional classroom material. We try to do things outside the classroom that allow students to express themselves, debate, and even argue with perspective.

What is Benedict doing in the classroom?

We have been intentional in the wake of last summer’s events. We developed a course, “Race, Crime, and Hate: From Emmett Till to Black Lives Matter.” By using a multidisciplinary approach and by rotating the subject matter taught, we engage students around current events. My guess is, for next summer or fall, we’ll take up the political system. Things like the Electoral College and runoff elections. We want to provide a lens through which students can examine the issues of the day.

How do you instill a sense of civic duty at a time when it’s easy to become cynical?

We’re having the opposite experience. Our students feel empowered. They’re excited. They watched Georgia turn blue. I’m seeing that sense of empowerment from our students. They want to engage. They’re asking, To whom do I write? How do we advocate effectively? So I’ve seen a burgeoning can-do spirit. They’re seeing things change because of their advocacy. —Vimal Patel

‘Incubators to the Future’

Kevin Colclough, a 2017 graduate of Morehouse College, in Atlanta, was among those celebrating as the Rev. Raphael Warnock became one of two Democrats from Georgia to win U.S. Senate seats on January 5, giving their party full control of Congress. Warnock, also a Morehouse alum, will be the first African American to represent the state in the Senate.

Colclough, a press assistant for U.S. Rep. Joyce Beatty, the newly elected chairwoman of the Congressional Black Caucus, captured the jubilation of many Black voters in a viral tweet: 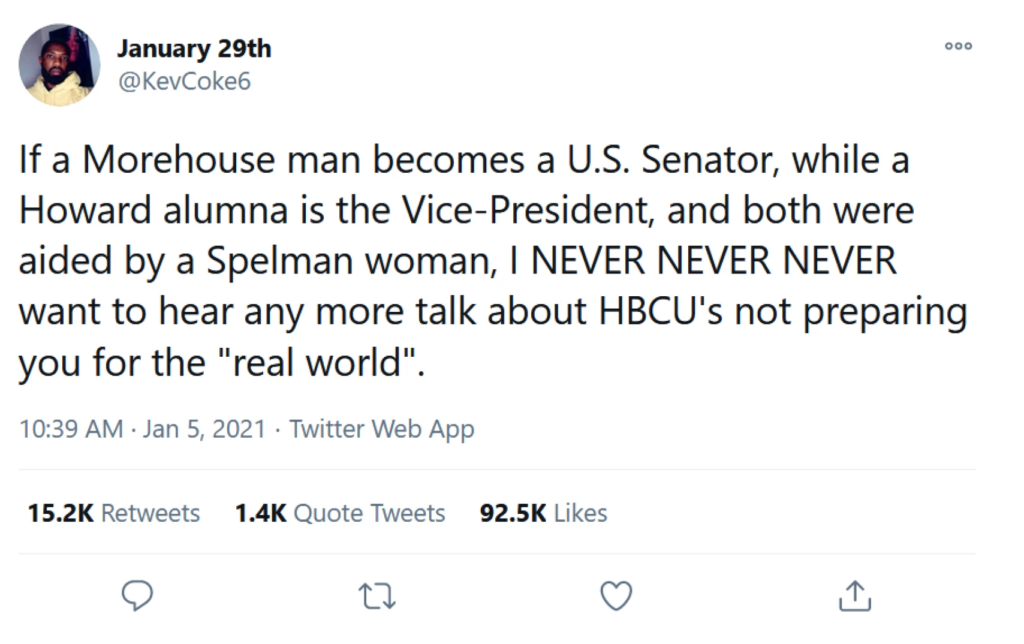 Colclough’s message, which has been retweeted more than 16,000 times, refers to the role that a Spelman graduate, Stacey Abrams, the state’s former House minority leader, played in rallying Black Georgians to show up at the polls.

But the celebrations among HBCU alumni were cut short when, the next day, a right-wing zealot paraded a Confederate flag through the U.S. Capitol, which had been stormed by Trump supporters.

Colclough, 25, described the emotional whiplash: “I was working from home, around 15 minutes from the Capitol, when people started texting me and asking, ‘Are you watching this?’” he said. What he saw on TV was shocking, but at the same time seemed to him a culmination of years of the Trump administration’s “fanning the flames of division and hatred.”

The Capitol is a place he visited in awe on school trips and where, for the past year, he has regularly entered through security gates as a legislative staff member. “These people wreaked havoc on a place that is sacred, not just for Black Americans, but for all Americans,” he said.

You have this great moment of hope, and then there’s a crisis that shows how far we have to go.

“Coming right after the Georgia runoff, it kind of represented to me just what it’s like to be Black in America,” he said. “You have this great moment of hope, and then there’s a crisis that shows how far we have to go.”

Some people, he said, question whether the relatively protective environment of an HBCU prepares students to deal with the racism they’ll encounter after they graduate. But the confidence he gained at Morehouse, he said, steeled him better than any other education he can imagine for confronting ugly realities outside. “This is exactly why a place like Morehouse exists,” Colclough said. “As a graduate, you understand that you do belong here, and you are a part of the fabric of America.”

At his predominantly white private high school, he had grown accustomed to comments like “You sound white” and “You don’t play sports, so why are you here?” he said. “Just shock and awe that I presented myself the way I did.”

He was eager to get away from that when he applied to Morehouse. “HBCUs offer Black students a space to just be. It gives you a sense of confidence that you can belong. You don’t have to ask whether I’m good enough or smart enough or here only because of the color of my skin.”

Colclough was excited by Warnock’s win, as well as by Kamala Harris‘s election, along with Joe Biden, to the White House. “I had a lot of pride and a lot of hope going forward that people will start to see that you don’t have to go to the big-name schools that all of the other senators have gone to,” he said. “You can go to a place like Howard and become a vice president.”

Historical firsts were one reason that Forbes magazine declared 2020 “the year of the HBCU.” Colclough said he hopes the momentum will continue even when the post-election excitement fades. “They’re incubators to the future that offer students of color a unique opportunity they won’t get anywhere else.” —Katherine Mangan