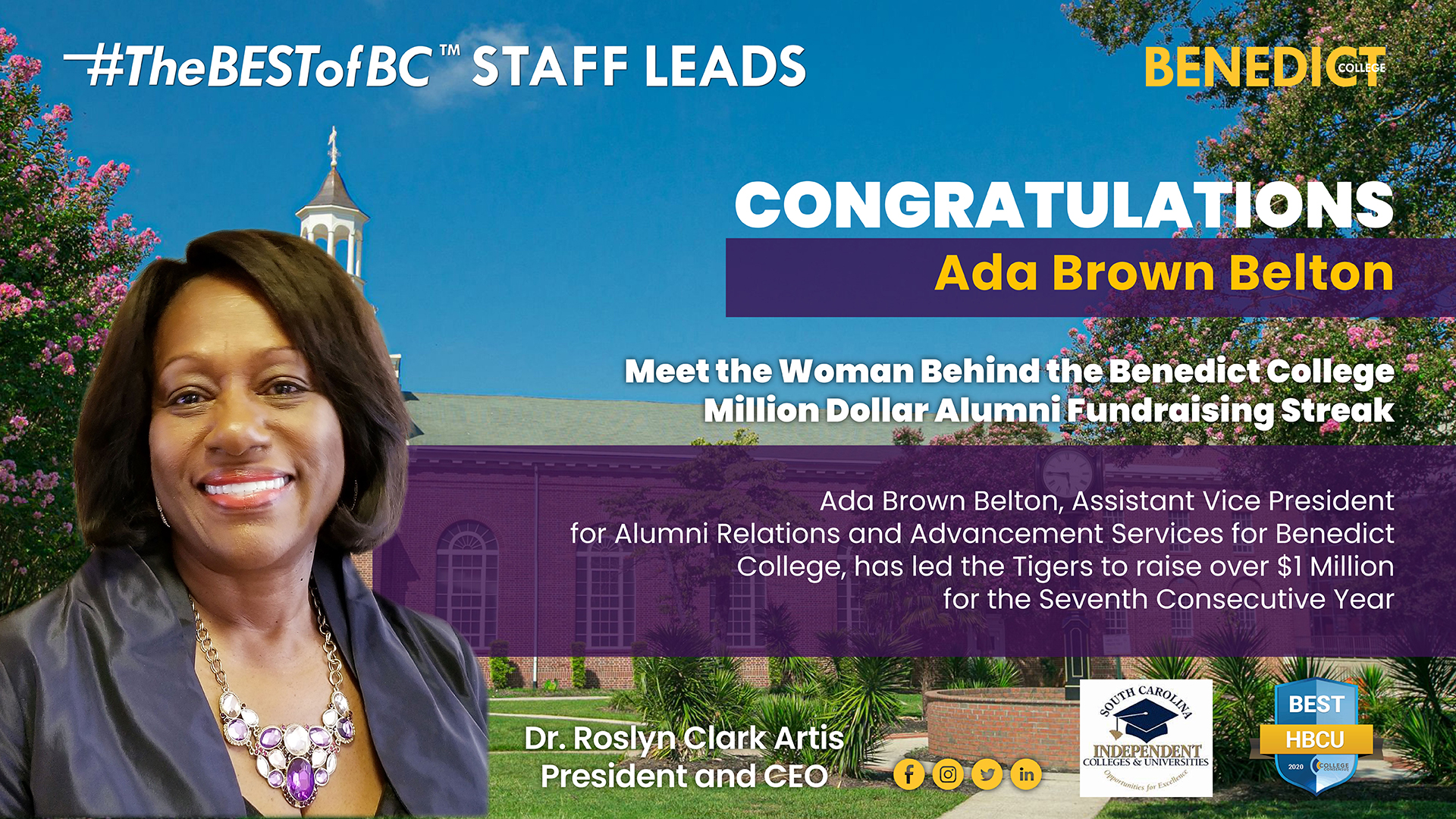 Columbia, SC –July 2, 2021, Thanks to the world’s most generous alumni, the Benedict College Tigers proved there is financial strength in numbers.  Amid the recovery from a worldwide pandemic, the BC Alumni broke their own record.  Leading the charge was Ada Brown Belton, Assistant Vice President for Alumni Relations and Advancement Services for Benedict College. Under Belton’s leadership, the Alumni Fund surpassed $1M for the first time in its history in 2015. The Tigers have reported record-breaking contributions for seven consecutive years, with an all-time high that exceeded the $1.5 million mark for the 2021 Alumni Fund Campaign.

“We are profoundly grateful to our dedicated alumni,” said Dr. Roslyn Clark Artis, President and CEO of Benedict College. “The funds the alumni raised will make a tremendous difference in the lives of our students. I am especially proud of Ms. Belton for her tenacity and drive. She consistently raises her own bar and encourages her fellow tigers to pay it forward. As we continue to celebrate Benedict’s 150th Anniversary, exceeding the $1.5M is particularly significant.  Our alumni are the absolute BESTofBC!”

The College has achieved significant growth in its alumni area during Belton’s tenure. Over the last 20 years, Belton has raised over $20,000,000 for the Alumni Fund and was a part of the team that secured over $30M in capital support.

“Benedict College has the BEST supporters and competent and capable leadership.  I have the joy of working with a core group of Benedict Alums from around the nation who believes as I do that the outcomes from giving back positively impact the lives of those we serve,” said, Belton. “We believe  our students will help to create better communities around the world.  This is our Benedict, and we claim complete ownership and responsibility for her.  If we do not lead the charge for support, who will?”

Benedict College has been recognized by the SC Association of Independent Colleges and Universities, becoming one of the first HBCU’s to be honored with an award of $20,000. In 2018, Benedict College Alumni were featured on the HBCU Digest Annual List of the 50 Most Intriguing and Influential People of the Year in the HBCU community for its record-breaking fundraising.

Over the past ten years, three out of five Benedict College graduates have attended professional or graduate schools. There are over 18,000 proud Benedict Tigers throughout the nation. Benedict College has been a community leader for over 150-years and is a significant contributor to South Carolina and the region. Contributing $130 million and 1,218 jobs in total local and annual economic impact, a Benedict graduate working full-time throughout his or her working life can expect to earn $1.1 million in additional income because of their Benedict College degree.