A program has started in Charleston that connects students, mostly from Historically Black Colleges and Universities, with internships in the tourism sector.

This summer’s interns, who are midway through the 10-week inaugural program, hold paid positions with hotels, resorts and, in one case, the airport. Interns participate in weekly sessions that include discussions about Charleston history and career-focused Q&As with hospitality professionals.

The concept came out of Heart for Hospitality, an initiative the tourism marketing group Explore Charleston laid out in 2019 with a goal of building a workforce that’s more equitable and diverse — meaning one that doesn’t just recruit racially diverse candidates, but makes sure people from underrepresented communities hold leadership roles and have opportunities for advancement.

Explore Charleston CEO Helen Hill suggested in the fall they assemble an internship class of 10 college students for summer 2021.

The students, whose hometowns run from Columbia to Buffalo, N.Y., and Kingston, Jamaica, started their internships May 25.

Participating employers had to agree to create internships that would be career development-focused, said Marc Gibson, director of inclusion and engagement for Explore Charleston, who, with recruiter Louis Yuhasz, led the creation of what they’re calling the Intern Cultural Enrichment Program.

The idea is to prepare the students to have leadership roles in the industry, so many are shadowing general managers and cycling through several properties and multiple departments during the summer.

Internships had to be designed in a way that would “expose them to different areas of hospitality and tourism within their organization,” Gibson said.

“They couldn’t just hire them to work at the front desk all summer,” Hill said. “They had to agree that they would have a diversified program.”

Samuel Alexander, one of two interns placed with Charlestowne Hotels, started out at the Meeting Street Inn but will also be working with the Indigo Inn and the Jasmine House.

This summer will serve as a kind of “crash course” on being a general manager, Alexander said. Three weeks in, he had worked in every department.

Throughout the summer, they’ll also sit in on revenue and marketing calls and shadow managers and department heads, said Brittany Lee, director of human resources at Charlestowne.

Alexander, who is studying hospitality and tourism management at the University of Maryland Eastern Shore, was not familiar with Charleston at all before applying to the internship. Explore Charleston gave a presentation in one of his classes, and “I kind of took a leap of faith,” Alexander said.

So far, that leap is paying off. He likes the culture of Charleston, he said, and wants to keep learning more of the history. 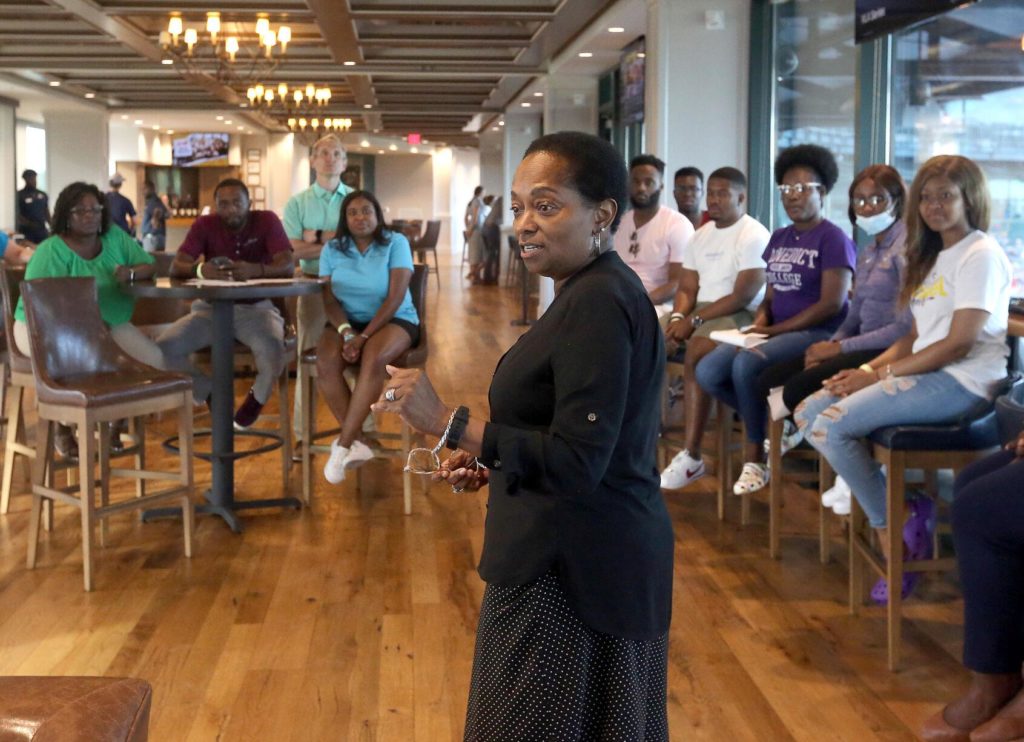 Every Tuesday from 6-9 p.m., the students gather at a different location for a program, each with a different theme and featured speakers. For their June 8 session, students met at Joseph P. Riley Jr. Park about an hour before first pitch for the night’s RiverDogs game.

Before attending the game together, the interns heard from three people on the topic of “overcoming obstacles.” The speakers included Chris Singleton, a former minor league baseball player and the director of outreach for the RiverDogs. Singleton, whose mother was one of nine people killed by a white supremacist at Emanuel AME Church in 2015, is also a frequent speaker who has traveled the country to talk about resilience and forgiveness.

Putting together this program for the first time, particularly when it came to developing relationships with schools, took time, Gibson said. Repeating the process for 2022 would build on that.

The students come from six different schools, four of which are HBCUs.

Five of the students, more than any other participating college, are enrolled at Columbia’s Benedict College.

Laronda Johnson, an experiential learning coordinator at Benedict, said she’s been in touch with those students this summer and, based on their feedback, she thinks the program is delivering what was promised.

“There’s always someone saying, ‘We have the best internship program and your students will get to learn this and have the opportunity to do this.’ And then it doesn’t happen,” Johnson said. “For me to actually have students call me and send me pictures and say, ‘Look at who I met,’ or ‘Look at this on my LinkedIn page,’ — it’s exciting for me.”

Benedict College doesn’t have a hospitality major, Johnson said, but there are students studying areas like finance and sports management who are interested in careers in hospitality. Johnson said she hopes they’ll be able to continue to send students through future rounds of the program.

The difference for her started in the fall, when Explore Charleston first reached out about plans for an intern program.

“It was clear they were wanting to build a relationship, not just saying, ‘Hey, we have this program,’ ” Johnson said. “They wanted to get to know the students.”

Plus, paid internships can be few and far between, Johnson said. Finding one that has provided housing is even more rare.

Hill said they tried to think of the barriers that could keep a student from taking an internship opportunity, and lodging was the obvious one.

For at least this first run of the program, housing is being provided for all interns. Most of them are staying on the College of Charleston campus, within walking distance from some of the downtown properties where students are working. Interns at Wild Dunes Resort on Isle of Palms have housing provided in Mount Pleasant.

Lee of Charlestowne Hotels said she thinks these internship experiences will form connections for the students between Charleston and hospitality.

“When they think of one, they’ll think of the other,” Lee said. “And they’ll also feel connected to the area because they’ve had this opportunities to meet with local leaders.”

Alexander said he could see that as a possibility for his career, especially after learning the College of Charleston offers a master’s degree in one of his main interests: hospitality revenue management.

Having Charleston top of mind for these students’ minds is exactly what they’re hoping for, Hill said. If former interns go on to hold leadership positions in Charleston’s industry, they become professional connections for future interns and, over time, form a kind of alumni network.