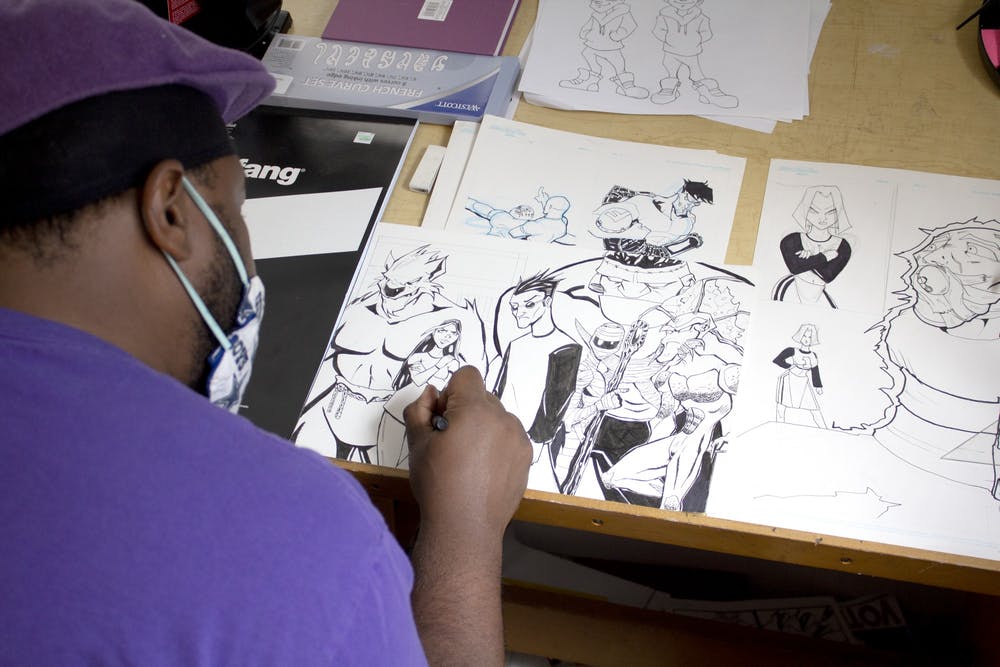 ‘He’s a voice for the 99%’: Corey ‘Roc Bottom’ Davis advocates for small-scale artists

Featured photo: Corey “Roc Bottom” Davis works on several unfinished pieces in his home studio in Columbia, South Carolina. In the future, Davis said, he hopes to open a gallery to promote artists in the Columbia community. By Cera Hansen

Not only is he successful in his own work at Rocbottom Studios, but he has also become an advocate for the celebration of small Columbia artists and progress within the local art community.

Davis uses his projects to celebrate diversity and to provide opportunities to other Columbia artists.

One such artist, who goes by her creator name, Amethyst, was recruited onto Davis’s “Shadowclub Karma” project to work on concepts for background art.Davis reached out to Amethyst about the project even though she was not previously involved in background art and is not widely known in the art community.

Davis is constantly on the lookout for other lesser-known creatives as well. He said he enjoys attending events and shows that highlight local artists but is tired of seeing the same kinds of art and the same artists being recognized.

“If you keep getting the same thing over and over again, with the same people, then you can’t grow like that. That’s the whole point of art, at least from what I’ve been taught, was that growth is a part of the artistic method,” Davis said. “And art is supposed to make you uncomfortable to a degree. It’s supposed to take you out of your normal. It’s supposed to remove you from that and throw you into other spaces.”

Compared to the art districts of places such as Columbus, Ohio, and Providence, Rhode Island, Davis said he believes Columbia’s art scene lacks diversity. This lack of diversity can be seen within the types of art which are represented and within the artists themselves.

One way he hopes to combat this is by working to assemble a group of less main-stream artists in a kind of “island of misfit toys” manner.

With this team, he said he hopes to improve the community by bringing fresh creative minds and projects to the attention of audiences “so front and center that [the community] can’t ignore it.”

Davis is collaborating with his business partners to create a production company for animators of color and is working on a project run entirely by women.

“[Davis] is a sharpshooter,” said Marion “Crush” Rush, a local photographer and photojournalist. “If he says he wants to hit a target, with his creativity, he’s going to hit the target. And he’s going to blow through it and hit the target right behind it in one shot. He is a pioneer. He’s a creator. Corey is creation.”

Rush said his friendship with Davis is a genuine one. If Rush ever needed anything, he said he knows he only has to call Davis and ask.

“Corey has been a big brother to me,” Rush said. “I have best friends and things of that nature, but sometimes a best friend is not quite the same as a brother. And Corey has consistently been my big brother.”

Rush said Davis is “innovative, outspoken, hilarious, driven and true to self.”

Amethyst said Davis is a “rule-breaker.” She said he often shares his opinions on platforms such as Facebook and “doesn’t mind being authentically himself.”

Davis plans to further contribute to the evolution of Columbia’s art community by opening a studio that would allow for in-house animation, the production of comic books and a gallery. This gallery would be used to promote a variety of artists the community would not otherwise be exposed to.

Davis is not new to the pursuit of innovation. His comic “Lion’s Den Revolution” was the first of his works to be published in a digital desktop format and was distributed worldwide.

His current projects include the comic “Jet Boy,” which tells the story of a 10-year-old boy of color who works for a top-secret government agency. “Jet Boy” will first appear on Netflix in the second season of “Outer Banks” and then become its own animated show.

Davis is also working on “Shadowclub Karma,” which is in the midst of becoming an animated series Davis and his team are pitching to Amazon Prime.

Davis said there are also ways that members of the community can help improve the Columbia art scene.

“If you want to see the diversity, if you want to see more stuff within the community that’s not being expressed or not being put on display, then the biggest thing that you can do is support those people who aren’t being seen and whose voices aren’t being heard,” Davis said. “And just try to amplify those voices by your support of their work and making sure that other people within the community see it.”

PrevPreviousBenedict College is one of the First Eight Community Sites Recognized as Part of the Newly Established Reconstruction Era National Historic Network
NextBenedict College Becomes a Community Center for Coding and Creativity, in Collaboration with Tennessee State UniversityNext
Menu