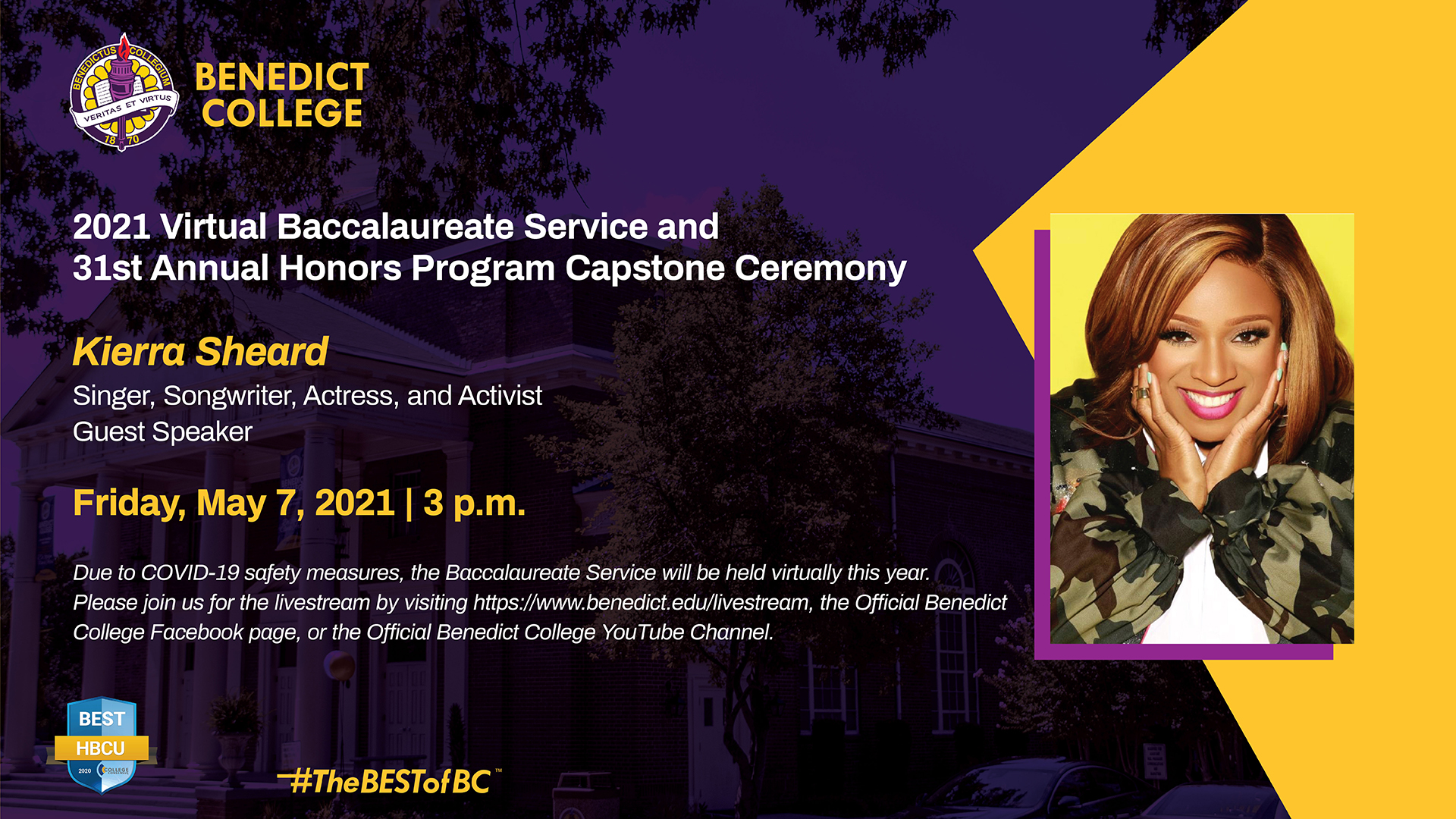 Gospel Singer, Entrepreneur, and Author Kierra Sheard-Kelly will give the Keynote Address at the 2021 Benedict College Virtual Baccalaureate Service

The service will be virtual and streamed on the Benedict College website and social media pages on Friday, May 7th at 3 p.m.

COLUMBIA, SC., April 30, 2021 Today, Benedict College announced that Gospel Singer, Entrepreneur, and Author Kierra Sheard-Kelly will be the Guest Speaker at the 2021 Benedict College Virtual Baccalaureate Services on Friday, May 7th at 3 p.m.  Due to COVID-10 safety measures, the traditional church services will be held virtually and streamed on the College’s website and social media pages. 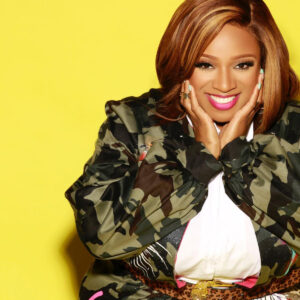 Sheard-Kelly is a graduate of Wayne State University and is currently working on a master’s degree in clinical psychology. She embraced her entrepreneurial spirit and launched Eleven 60, her clothing line, in 2015. She is also the founder of BRL- Bold Right Life, a national organization with 15 Chapters dedicated to youth empowerment. In April of 2021, Sheard-Kelly first Book titled Big, Bold and Beautiful: Owning the Woman God Made You to Be was ranked #1 on Amazon’s Best Seller’s list. The book about empowerment is geared toward teens and young adults.

“I am delighted to welcome Grammy Award-nominated singer and author Kierra Sheard- Kelly as our virtual Baccalaureate Service speaker,” said Dr. Roslyn Clark Artis, President and CEO of Benedict College. “She is an inspiration to millions of people, especially young people who have watched her live boldly in her faith. Her empowering message that everyone can make a difference will resonate with our 2021 BEST of BC graduates.”

Sheard-Kelly made her professional recording debut at the age of 10-years old, on her mother’s (Grammy award-winning Karen Clark-Sheard of the legendary Clark Sisters) debut solo album Finally Karen ( 1997). The song The Will of God won a Stellar Award for Best Children’s Performance, while the other, The Safest Place, became a favorite on gospel radio. Growing up in a musical family, Kierra quickly began singing vocals alongside her mother, the Clark Sisters, and her aunt Dorinda Clark-Cole.

The Detroit native’s debut album I Owe You was released in 2004 and included production and songwriting from such luminaries as Rodney Jerkins, Warryn Campbell, Erica and Tina Campbell of Mary Mary, along with Sheard’s cousin J Moss and Tonex.  Sheard- Kelly became the first new artist in Billboard history to debut at number one on the Top Gospel Albums chart.

In June 2006, shortly after graduating from high school, Sheard-Kelly issued her second LP, This is Me, which reached number one on the Billboards gospel albums charts the week it was released. It received a Grammy nomination for Best Contemporary R&B Gospel Album. In October 2008, she appeared as a guest vocalist on the single God in Me by Mary Mary, which became a major gospel hit. In 2014, her fifth album, Graceland, became her fourth gospel number one and earned Sheard a nomination for Contemporary Female Vocalist of the Year at the 30th Annual Stellar Awards.  Sheard- Kelly co-wrote her sixth self-titled album Kierra which debuted at number one on the Billboards Top Gospel Albums chart and became her 5th chart-topping album.

The Baccalaureate Service is a traditional and religious service that celebrates the academic achievement of the class of 2021. During the 31st Annual Honor’s Capstone Ceremony students who achieved academic excellence through the Honors program will be adorned with gold medallions engraved with the Lamp of Knowledge symbol and academic regalia that distinguishes them as scholars.

The Baccalaureate Service and the 31st Annual Honor’s Capstone Ceremony will be streamed on Benedict’s website at www.benedict.edu/livestream, Benedict College Official Facebook page, and the Benedict College YouTube channel.

Founded in 1870 by a woman, Bathsheba A. Benedict, Benedict College is a private co-educational liberal arts institution offering 25 competitive baccalaureate degree programs. The Midlands HBCU welcomes students from all 46 counties in South Carolina, 30 states across America, and 26 countries around the world.