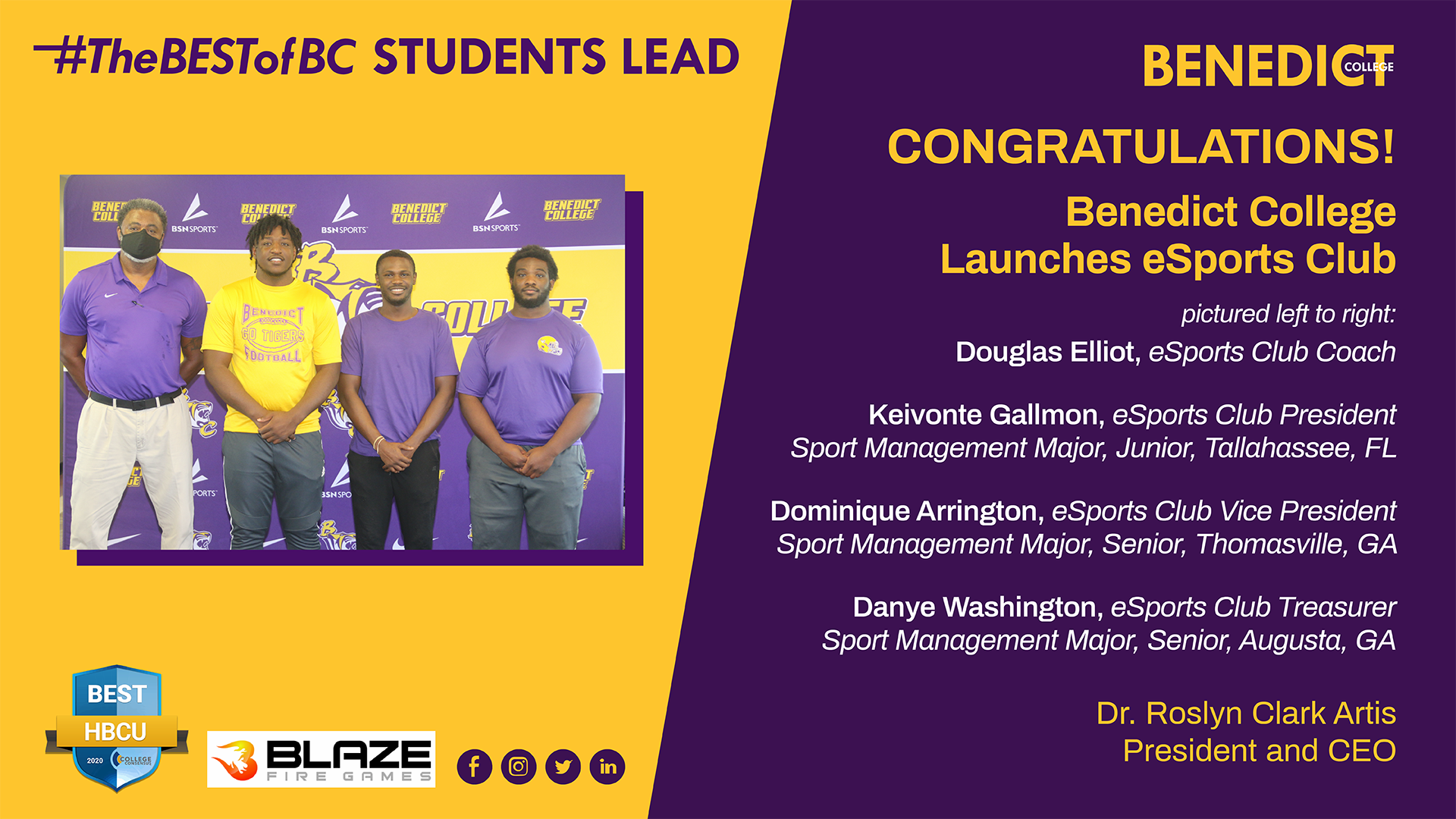 “Esports is one of the world’s fastest-growing sports. It is a billion-dollar industry with a combined projected global audience of 557 million by 2021,” said Dr. Roslyn Clark Artis, President and CEO of Benedict College.

Isaiah Reese, CEO and Co-Founder of Blaze Game, said the 360 partnership would emphasize content creation, innovation, and how to leverage gaming and technology as a professional career pathway. As part of the program, participants will have access to industry micro-credentialing certificates in subjects such as Intro to eSports, Coaching, Broadcasting, eSports Digital Marketing, eSports Project Management, AI Gaming Analytics, and Health and Wellness.

“We are extremely excited to launch the esports and competitive team community with Benedict College as its partner.” said Reese, “This agreement will allow our company to  break down barriers and introduce the Benedict Tigers to a 2-billion-dollar gaming esports industry.”

“Congratulations to Jayden Lockett and Keivonte Gallman on their first-place wins during our inaugural eSports Tournament,” said Dr. Artis.

The Benedict College eSport Club is accepting new gamers, if you would like to join, contact: douglas.elliott@benedict.edu or paula.shelby@benedict.edu or call 803-705-4775.

About Benedict College: Founded in 1870 by a woman, Bathsheba A. Benedict, Benedict College is a private co-educational liberal arts institution with over 2,100 students enrolled in its 25 baccalaureate degree programs. Defying trends, Benedict College maintains an equal male and female student population. This Midlands HBCU welcomes students from all 46 counties in South Carolina, 30 states across America, and 26 countries around the world.

Over the past ten years, three out of five Benedict College graduates have attended professional or graduate schools. There are over 17,000 proud Benedict Tigers throughout the nation. Benedict College has been a community leader for over 150-years and is a significant contributor to South Carolina and the region. Contributing $130 million and 1,218 jobs in total local and annual economic impact, a Benedict graduate working full-time throughout his or her working life can expect to earn $1.1 million in additional income because of their Benedict College degree.

Benedict College has been highly regarded and exceptionally ranked for its programs by several academic and traditional publications.  For example, Benedict College was ranked as one of the top baccalaureate colleges in the nation by Washington Monthly magazine for creating social mobility, and producing cutting-edge scholarship and research. In 2019, Benedict College received the 2019 ACE/ Fidelity Investments Awards for Institutional Transformation and was named the HBCU of the Year by HBCU Digest.

Benedict College is accredited by the Southern Association of Colleges and Schools Commission on Colleges to award baccalaureate and masters degrees. Five of the College’s degree programs hold national accreditation: The School of Education, Social Work, Environmental Health Science, Arts and Sciences and the Tyrone Adam Burroughs School of Business and Entrepreneurship.

About Blaze Fire Games:  Blaze Fire Games is a licensed digital online games provider, which taps into a variety of creative talent and skills across the globe.  The company aims to connect a diverse group of participants by introducing them to a career path where they will learn to compete in a gaming environment.

PrevPreviousVoting is a Qualified Privilege by Dr. Roslyn Clark Artis
NextBenedict College is one of the First Eight Community Sites Recognized as Part of the Newly Established Reconstruction Era National Historic NetworkNext
Menu