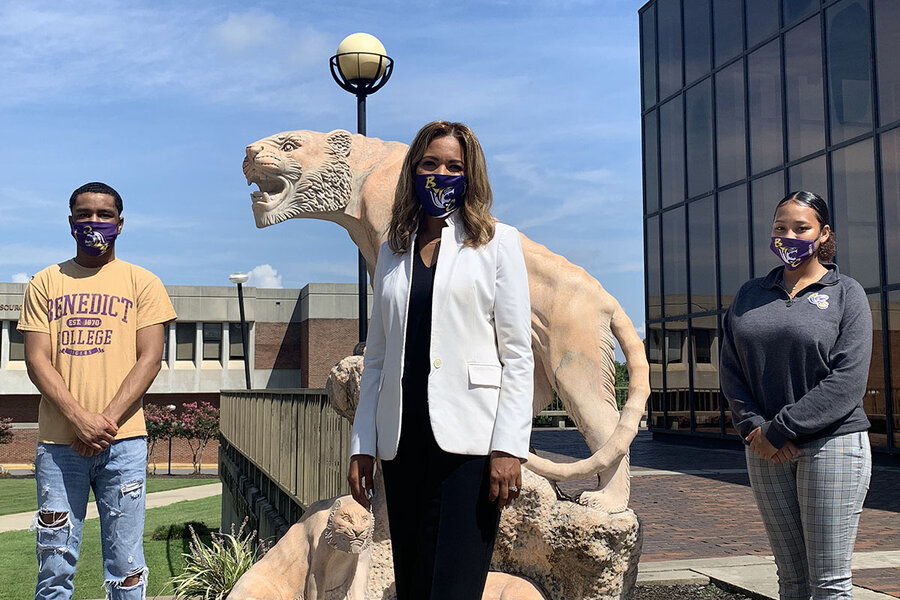 ‘A shelter in the time of storm’: When on campus is safer than online

What criteria should be used for opening a college campus during a pandemic? For some schools that serve students of color, the decision included weighing where their students would be more safe.

When the coronavirus pandemic shut down colleges nationwide in the spring, Fabeina Riggins returned home to her three younger siblings, three dogs and a cat – and lots of distractions. The walls of her California home were thin, and the house would echo with the sound of multiple Zoom calls.

So when her institution, Benedict College, offered students the option of returning to campus this fall, Ms. Riggins jumped at it.

“I knew I needed to come to campus,” she says. “I just needed to separate myself.”

Ms. Riggins, a sophomore, is one 678 students now living on the Columbia, South Carolina, campus – a third of the usual number.

Roslyn Artis, president of Benedict, a historically Black college, is acutely aware of the health challenges of reopening during a pandemic. She has implemented precautions to protect staff and students in recent weeks, spending tens of thousands of dollars to do so.

But as Dr. Artis sees it, there would be risks in remaining fully remote, too. Many of her students come from multi-generational homes, where they have to compete for access to computers and broadband. Twelve percent live in rural areas with no internet at all.

Home isn’t always the safest place, either. Some students come from dangerous neighborhoods; others live in cramped apartments with family members who work in high-risk jobs.

As college leaders continue to debate whether it’s safe to reopen campuses, the presidents of many of the nation’s minority-serving institutions are arguing that it would be dangerous not to. Two-thirds of the private historically Black colleges and universities, or HBCUs, that are members of the United Negro College Fund – including Benedict – have settled on a hybrid approach for the fall, offering both in-person and remote options.

“They know they provide a refuge for students,” says Brian Bridges, vice president of research and member engagement for UNCF.

In a survey conducted by UNCF in June, more than 80% of students at member colleges said they preferred either in-person classes or a mix of in-person and online. Nearly a quarter said they were unlikely to return if courses were entirely online.

Mikal Conner, a senior at Benedict College, says he returned to campus because he doesn’t learn as well online. As the first in his family to attend college, he wants to finish his final year strong.

“My grandma is very spiritual, and she’s praying to God that I graduate,” he says.

Mr. Conner worried that if he had remained at home, learning online and interacting in the community, his mother and grandmother might have been at risk because they have underlying health conditions. “If I were to catch it, where would I go?” he wonders.

Communities of color have been hit disproportionately hard by the pandemic, with Black, Hispanic, and Native Americans becoming infected at a rate more than twice that of white Americans, according to the Centers for Disease Control and Prevention.

They’re also more likely to have lost jobs during the pandemic, in part because they are less likely to have a college degree, research by Georgetown University’s Center on Education and the Workforce shows. In April, when unemployment rates peaked, close to 20 percent of Americans with a high school diploma or less were out of work, compared to 9 percent with a bachelor’s degree or higher.

These statistics underscore how critical it will be to keep students enrolled through the pandemic, Mr. Bridges says.

“Students need these degrees to break the cycle of poverty that exists in so many of their families,” he says. “We don’t want to lose a generation of Black college students.”

A safe space – with rules

After campuses closed last spring, rates of hunger and homelessness among college students spiked, a survey by the Hope Center for College, Community, and Justice showed. Benedict gave food subsidies to 250 students, and housing subsidies to 90.

But for students of color living with the twin threats of racism and a pandemic, minority-serving institutions like Benedict play an additional role: They are a safe space, “a shelter in the time of storm,” to quote Mr. Bridges and the biblical hymn.

“It’s an affirmative place to be, a safe place to be, a place that wants you to be there – so long as you’re following the rules,” says Cynthia Teniente-Matson, president of Texas A&M-San Antonio, a Hispanic-Serving Institution.

At Benedict, the list of rules this year is long – and strictly enforced. Curfew is midnight, and students must pass through a security gate when returning to campus. Masks and social distancing are mandatory. Students have been put on notice that they will be “excised from the community” if they break the rules, Dr. Artis says. She’s already dismissed a couple who “thought their relationship absolved them of the community standard.”

She has also capitalized on the sense of shared responsibility that small colleges cultivate. She’s asked students to hold each other accountable, and to protect one another and their professors. So far, four students have tested positive in the first four weeks of the semester.

Benedict, like many small, private colleges – and HBCUs in particular – was struggling financially even before the pandemic hit. This semester, its enrollment fell 12 percent, costing the college $2.4 million in tuition revenue. Combined with $1.8 million in lost housing revenue from the dropouts and the students studying online, the college faced a $4-million budget hole heading into the school year. Dr. Artis is worried that she’ll lose even more students this spring if her campus doesn’t reopen fully.

But she bristles at the suggestion that colleges like hers “are only open because they’re concerned about the money.” With most overhead costs fixed, “I’m losing money every day,” she says.

“I don’t criticize anyone for being closed,” she adds, acknowledging that her approach to containment might not work at a large college with a porous perimeter. “These are decisions unique to campuses and the demographics they serve.”

A month into its reopening, Benedict looks and feels different than it did last fall, Dr. Artis says. Pathways are unidirectional, and purple and gold dots – the school’s colors – are on the ground marking off six-foot increments. The food court is grab-and-go, and the cafeterias are monitored by repurposed coaches. In the classroom, students sit six feet apart, separated from their professors by plexiglass barriers.

To Ms. Riggins, who came to campus to escape her noisy, chaotic home, it’s almost too quiet.

“I miss how it was, everybody being on campus,” she says. Still, with so many of her friends stuck studying at home, she adds, “I’m grateful to be back.”